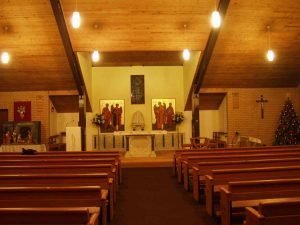 Upgrade of the St Edmund Campion sound system to provide improved speech intelligibility and support for the electric organ
The customers brief was to:-

Improve the speech intelligibility in the main church and the crèche.

Increase the coverage of the system to include the entrance hall.

Provide realistic sound amplification for the electronic organ and play back of CDs and other media.

Both the above facilities had to be simple for users to use.

To accomplish these goal, a three part system was devised which employed:-

After the new sound system was installed and set up the results were exceptional. Speech was crisp and clear and the coverage was extremely uniform. With regards to the playback and in particular the organ reproduction , you would have thought you were in a major church , the low frequencies move you and the available undistorted volume has plenty of head room to cope with the most enthusiastic congregation

The equipment used for the upgraded sound system was a combination of new speakers by “Apart“, amplifiers from “EV ” and “IMG” and signal processing from “Seed” , with an existing mixer and amplifier which the church already owned