All IEC cables are not the same !! 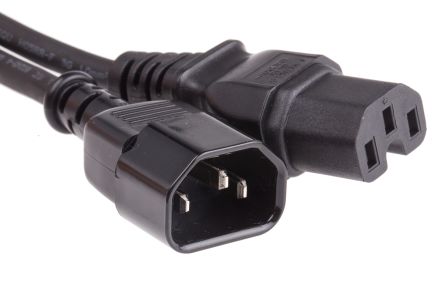 IEC leads. I remember when (kettle leads) first appeared, these were uses to connect the mains to a kettle and were rated at 13 amps.

IEC leads had cable which had a cross sectional area of 1.5 mm and they were fitted with plugs with a 13 amp fuse . This arrangement in free space is fine and the cable did not overheat. A little while later, moulded lead assemblies came along and no one noticed that some of them were no longer rated at 13 amps but 10 amps. And as the cable was no longer 1.5 square mm but more like 1 square mm were generally fitted with fuses rated at 10 amps correctly rated at 10 amps. This wasn’t much of a problem to most people as they were no longer using this type of lead to power 3 kw kettles but to power lower power loads, so no one really noticed. If they did uses the lead to power something which required 13 amps the 10 amp fuse would blow and they would replace it with a 13 amp fuse, resulting in the lead getting hot quite probably without the user noticing

Moving on to the present day

There are now lots of relatively low power devices using IEC leads .The leads that they supply with them look just like the familiar IEC leads until you look more closely and instead of 1.5 square mm cable these leads are made with .75 square mm cable and are fitted with 5 amp fuses which correctly protects the cable.

Now we have a much bigger hazard. if we use the lead to power a 3kw device, the fuse blows and its very easy to think oh someone put the wrong fuse in this lead I will replace it with a 13 amp fuse. Now we have a piece of .75 square mm cable with a 13 amp fuse and it is going to get very hot, probably melt and may well catch fire.

The current rating on the plug and the cross-sectional area of the cable of these low power leads is not easy to read, especially if you’re not looking for it, which I don’t think many people are.

The point I am making is All IEC cables are not the same and their current carrying capability isn’t always going to be 13amps. So before you put a 13 amp fuse in it, check the rating and if you are not sure don’t use it. Ask someone who really knows to tell you what the lead is good for then mark the lead clearly and fit it with the correct fuse.