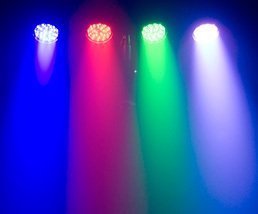 Apart from the obvious one that “LED par cans do not produce anything  with a wave length short enough to generate violetie blues” so we cant get colour mixes that include these, so purple is out. Tri Colour LED lanterns also seem to have a problem producing a natural warm daylight, I’m don’t know the theory behind this but I know it happens.

Another, not so obvious problem is the digital resolution. Yes with full level we have mega different colours available but look what happens when you are using just two colours. At full level you still have a huge number of variations, but when you are only working up to  half level for each, the number of variations has dramatically decreased. Take it to the extreem at the bottom end and use only 2 levels for each of the two colours, the number of variations in colour is only 4! Not that you are likely to use lanterns at these very low levels but you can see what I mean.

Anyway on to the “arty bits” of using LED par cans

The second thing I want to highlight is that, when you were forced into using a lantern for each colour you want, because you have to use a different gel , you were also forced you into having an additional  lantern and hence a physically different source position as well . The result is when you change colour you also get a movement associated with changing colour . This does not happen with a tricolour led lantern, no change in position with change in colour!  If you want to create movement with a fixed source system, you still need to have multiple sources in multiple positions. This is an important dynamic effect in a rock and roll enviroment.