Sound system Problems ? give me a call

On the Monday morning I had an email from the a church.

Hi John,
I just thought I would pass on to you the very positive comments I received from the congregation on the quality of the sound at this mornings service. I did a couple of very minor ‘tweaks’ to levels during the week and it now seems to meet everyone’s expectations. Many thanks for your help.

This is  what led up to it.

A local church had been having progressively more comments from their congregation that the sound system in the church was not meeting their needs.

After talking to the original supplier , and buying a new mixing desk at their recommendation, which did not provide a satisfactory solution to their sound system problems;  The person in charge of the technical equipment in the church contacted me with a view to solving the problems for them. I arranged to visit the church along with some sophisticated equipment I am very familiar with, so I could compare this equipment with the church’s system. The equipment I brought with me included a Midas M32R digital desk which has brilliant tone control capability and a pair of  IMG LRAY 1000 miniature line arrays which have very controlled dispersion and a transparent sound 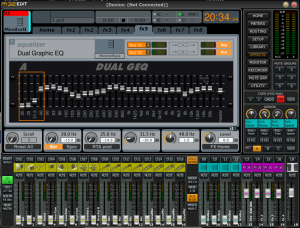 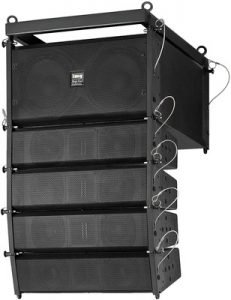 To get a feel for the system I played some music from a known recording through the system.

The first impressions were:-

Further tests were done with the test equipment and microphones alone to investigate the resonances in the building and feedback .  The results of these test showed:-

The conclusions from these tests with our systems are that the building has very reflective surfaced which causes sound systems to be prone to feeding back and no amount of tone control can prevent this from happening. The only way to deal with the problems is to selectively target the sound into the areas it is required and away from the places which cause problems

Something which has already been noticed was the way the churches speakers were poorly directed which did not help with the direct verses reverberant sound ratio in the majority of the church. This was corrected and an improvement to the intelligibility immediately noticed.

After experimenting with various set ups of the churches system’s eq and feedback suppressor the church’s system sounded better, although still far from ideal.

These results still did not account for some other resonances and the higher susceptibility to feedback of the current system.

During the tests I had noticed that the lectern and pulpit microphones sit on there respective podiums which are in the middle of the staging block , like being on a drum skin making them act like microphones on a bass drum. This problem was reduced by re positioning them on a wall of the staging, which is much stiffer, before the tests were continued.

To look at this problems further. I looked at how the other additional features of the churches mixing desk, besides the tone controls, were set up .

The first thing that jumped out (not all that obvious from first inspection ) was the ambiance microphone used for recording and to feed the loop, was actually being routed to the main system , this was because to get the ambient microphone’s  signal to the new memory stick recorder on the desk forces you to do it this way, as the record input to the recorder is derived from the master left and right outputs!. This defiantly is a bad thing to have to do, so to stop this happening, I stopped the ambient microphone feed going to the   record / main output by switching the main out routing switch for the ambient microphone off. now it only goes to the auxes.

The next thing which was not immediately obvious and not in the desk’s manual, is that the post fade aux 5 and 6 are still sent to the desks internal digital effects even when an external device (in the case of the churches system ,the loop amp and the feed for the external rooms) are connected to the output jacks! . So when I started my investigations the churches desk’s auxes 5 and 6 not only sent their signals to the loop and external room feeds, but also sent anything on these bus ( and that’s every channel including the ambiance microphone) to the effects processors and as these send their outputs to the main, outputs all sorts of unexpected sounds result . In particular reverbs and strange feedback. To overcome this I turned all the outputs and repeats from the effects processors right down

it should be noted that all the work done so far does not address the problem of the lack of time alignment of the balcony fills or that their coverage is not good.